THE FASTEST GROWING FLAT ROOF OPTION ON THE MARKET: EPDM

EPDM, which stands for Ethylene Propylene Diene Monomer, is a synthetic rubber derived from oil and natural gas. It is a system that is very similar to PVC, but it is rubber while PVC is plastic. EPDM is also very similar to TPO and the two roofs are often interchanged in discussion. The EPDM roofing system has grown over the last few decades on the strength of its reputation as a durable, inexpensive roofing option. These traits have spurred its growth and have made it the most common commercial flat roof choice in the US today. It is also revered for its quick installation. Out of all the flat roof replacement options available, EPDM is rapidly becoming the favorite. It would seem as though this roofing material is poised to be the king in the US flat roof market for some time.

As mentioned above, EPDM is very durable, has a very long life expectancy, can be installed quickly, and as a low price tag when compared with other roofing materials. This system is made from recycled material, which is a plus for the environment as it can give certain materials, such as rubber tire, a second life rather than ending up in a landfill.

Another way EPDM roofs help the environment is their long lifespan. If a metal roof and EPDM roof are installed on two different buildings at the same time, the metal roof will need to be replaced prior to EPDM. This means landfills are going to have to make room for another roof coming their way. The long lifespan of an EPDM roof means less waste.

The major disadvantage of an EPDM roof is the same as it is for most roofing systems that aren’t spray-applied: it has a significant number of seams that are prone to damage and leaking. When the sun beats down on these seams, they often become dry-rotted, or expand and pull away from the joint. This leads to leaks inside the building, and also may lead to more problems as the other sheets of EPDM can begin to pull up easier.

This is a great roofing system with many strengths, but the seams are a major drawback. They can lead to major problems but they are not beyond repair. This is obviously a good roofing system as it has grown to be the most prominent commercial flat roof in the US. 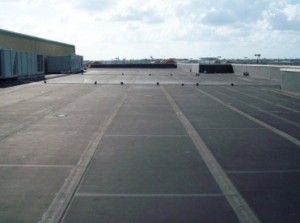